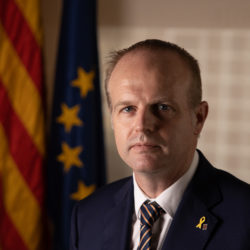 He holds a degree in Economics from the Universitat Pompeu Fabra (UPF) and master’s degrees in Public Economics (University of York, UK) and in Management (School of Public Administration of Catalonia).

Much of his professional career has been linked to public management. His experience in the Government of Catalonia (Generalitat de Catalunya) from 2006 to 2011, in the fields of economic promotion -as executive secretary of ACCIÓ- and in research support policies -as executive director of AGAUR (Agency for Management of University and Research Grants)- is particularly noteworthy.

Previously, he focussed his career to management tasks within the university environment -specifically at the University of Barcelona (UB)- which he combined with his role as an associate professor of Economics at the Pompeu Fabra University (UPF).