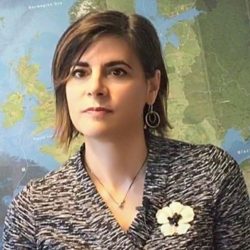 Anna Panagopoulou is Acting Director of Research and Innovation Outreach since April 2020 and Director of Common Implementation Centre in the European Commission’s Research and Innovation Department since 2016. From 2014 to 2016, Ms Panagopoulou was appointed as a Head of Department for Programme Support and Resources at INEA (Innovation and Networks Executive Agency). She joined the Trans-European Transport Network Executive Agency (now  INEA) as a Head of Unit in 2009. Between 1999 and 2009 she worked as Policy Officer in DG MOVE/ENER, where she was responsible for a variety of files in the area of EU transport and energy infrastructure policy, research policy and international cooperation. Ms Anna Panagopoulou joined the European Commission from the private sector in 1997 and holds a Masters’ Degree in Engineering.