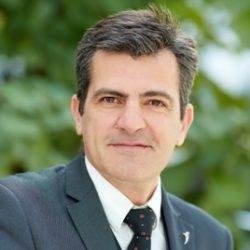 Iñaki San Sebastián is the CEO of Tecnalia, since March 2016. His professional career has always been linked to the field of research and the business world. Iñaki San Sebastián serves in several relevant national and international committees at Spanish and EU level, such as being the Vice-President of EARTO and participating in the Executive Committee representing Spanish Technology Centres. Mr San Sebastián is also Member of the Board of Directors of several spin-offs and participates in several clusters and business associations as Member of the Executive Board. After working for 16 years for Fatronik, Iñaki San Sebastián was appointed Managing Director in 2008. Simultaneously, from 2008 to 2010, he held the position of Technology and Market Manager at Tecnalia Corporation. In 2011, after the merger of 8 Technological centers into Tecnalia, he was appointed Deputy Managing Director. Iñaki San Sebastián obtained his Master’s Degree in Industrial Engineering from the University of Navarra (1989). In 2007 Mr San Sebastián received a Master’s Degree in Business Management (MBA-Executive) at the University of Deusto and in 2015 a Master Senior Management Program (PADE) by IESE Business School.