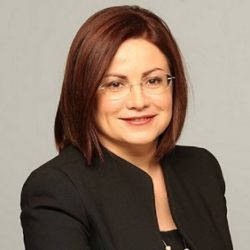 Maria Spyraki is a member of the European Parliament (MEP) for Nea Dimokratia Party – European People’s Party (EPP) since 2014. Ms Spyraki is currently serving in her second mandate in the EP as a member of the Committees on Industry, Research, and Energy (ITRE), on Regional Development (REGI) and on the Environment (ENVI). She is also Vice-Chair of EU-China Inter Parliamentary Committee and Co-Chair of the Inter Group for Sustainable Development and Climate Change. Maria Spyraki is the awarded MEP of the year 2019 for Industry, Research, and Innovation. Maria Spyraki has also worked for 22 years as a journalist in her home country Greece. She has also worked in the Press Office of the EP in Athens from 2003 to 2004, as well as in the office of Greek Commissioner to the EU, Mr. Stavros Dimas, from 2004 to 2009. Ms Spyraki has served as the Spokesperson of Nea Demokratia and is an elected member of the Nea Demokratia Executive Board. Her first degree is in Chemistry and she also has an MSc at Economics and Energy Policy.